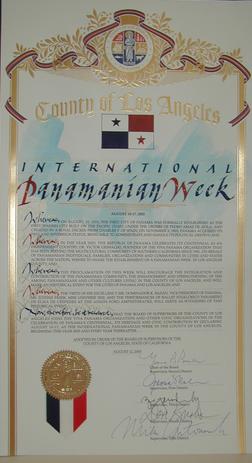 International Week of Panama in Los Angeles, which was declared by the Chair of the board, Ms. Yvonne Burke, as a commemoration of Panama's Centennial and the Foundation of the Old Panama City on August, 15, 1519.

The International Week of Panama is composed by (1) an Annual Gala where high profile Panamanians are recognized with the Ambassador Award for their professional achievements and contributions to the community in Panama, USA and the world, and (2) the Opening Night of the Films from Panama & the Americas Festival which exhibits productions of the new film industry in Panama & the Americas.

On August 12, 2003, during the Celebration of the Panama's Centennial and under the initiative of Viva Panama Organization's President and his collaborators, a motion to the Los Angeles County Board of Supervisors was placed suggesting the Proclamation of the