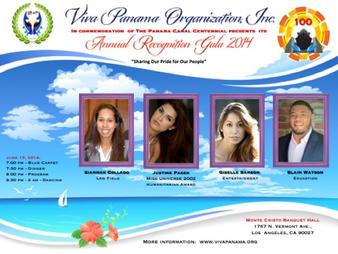 Los Angeles, June 13, 2014. Viva Panama Organization (VPO) always proud of its Culture and always striving to share it with the multicultural population of California annually recognizes each year Distinguished People for their professional achievement and contribution to the Panamanian community in USA.  Commemorating the Panama Canal Centennial, VPO put together its 2014 Annual Recognition Gala on Friday, June 13th, 2014, at the Monte Cristo Banquet Hall, located at 1767 N. Vermont Ave., Los Angeles, CA 90027.

After honoring our respective countries with their national anthems, VPO inspired on the commemoration of the Panama Canal Centennial, started the program with a musical on the Panama Canal sung by our guest artist and singer, Julio Hanson, accompanied by members of the Ballet Folklorico Viva Panama: Mario Melendez and Dennies Lara, opened our Gala with the Broadway style musical piece "Panama Canal", it was a great piece to commemorate the Centenial of the Panama Canal.

​Siannah Collado: Our first recognition of the night was for Siannah Collado Boutte, Attorney, Deputy District Attorney at Los Angeles County.
Giselle Samson: The second honoree of the night was Giselle Samson, dancer, model, designer, founder of Kiss the Planet brand & original cast member of America's Top Model.
Blain Watson: The third recognition was for Blain Watson, great achiever in the Educational field.
Justine Pasek: Our fourth recognition was the “Humanitarian Award" to  Justine Pasek, Miss Universe 2002, fundraising in Panama, USA, and the world improving the human condition of those suffering and in need.

Our special guest of the night, Julio Hanson serenated our contestants with his single “Color of Love”. (http://jahchild.com/music).  After his performance, the audience enjoy music from Jacinto French DJ. 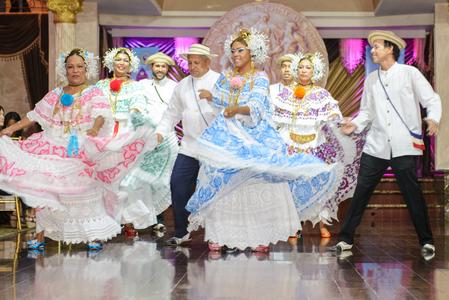