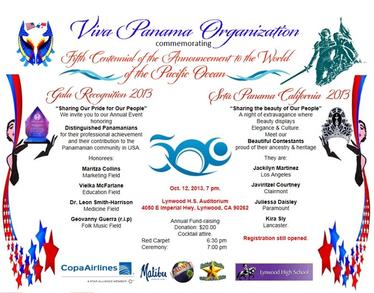 Celebrating the Fifth Centennial of the Announcement to  the World aboutthe Pacific Ocean.​  In commemoration of the 500 years of the First Sighting of the Pacific Ocean by Vasco Nunez de Balboa, Viva Panama Organization celebrated its Gala XXII, on Saturday, Oct. 12th, 2013, at 7 pm at the Lynwood High School Auditorium, located at 4050 E. Imperial Highway, Lynwood, CA 90262, with a Blue Carpet Event.

After the protocolar session, Ballet Folklorico Viva Panama opened the show with our Pre-Columbian production, where Balboa is conquered under the beauty of Princess Anayansi, daughter of Cacique Careta.  Then the entrance n Spaniard costume of the conquerors of our heart, the Participants to Srta. Panama California 2013: Juliessa Daisley from Los Angeles, Javiritzel Courtney from Montclair and Kira Sly from Lancaster.

We are grateful to Giselle Samson, Panamanian fashion designer and model, who was responsible for the catwalk training and choreography of the participants.

Among the honorees, we had Maritza Collins, a versatile international marketing professional, Vielka McFarlane, an icon in the education field in Los Angeles and Dr. Leon Smith-Harrison, an outstanding professional in the Medicine field.