Celebrating our Pride for Our People.

Viva Panama Organization always proud of its Culture and its people, sharing them with the multicultural population of California, every year recognizes its Distinguished Panamanians by their professional achievements and contribution its community in the USA.

On Saturday, June 23, 2012, at the International Celebrity Centre in Hollywood, the show started with all the luxury and elegance from the red carpet to the classy, talented and sophisticated performance of our guest entertainment star, Vicky Greco de Altamirano, star in her last musical production “Viva el Zorro” in Salt Lake City, UT.

We also had the presence of Mr. Rigoberto Arrechiga (President of MABA) and members of its Board; Board Members of the Latino Museum of History, Arts & Culture; members of Guatemala’s House of Culture; and Marisol Herrera, Sales Executive of COPA. 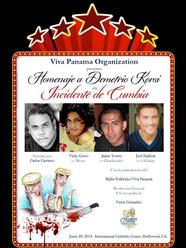 ​We had a Tribute to Demetrio Korsi's literary contribution, his daughter and actress Sheila Korsi received his award, and Ballet Folklórico Viva Panamá shared stage with special guests artists to portrait his famous poem, Incidente de Cumbia, with Victoria Greco de Altamirano as Meme, Jaime Torres as Chimbombó, Joel Zaldívar as the Gringo, Carlos Carrasco provided his voice as the Story Teller.

Gala Progran 2012
Pictures of the Night 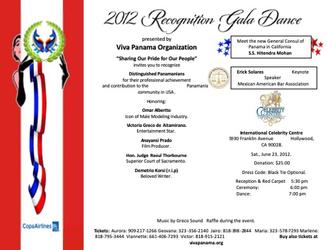 Among the especial guest, we had the new Consul General of Panama in California, Lic. Hitendra Mohan, who was introduced to the Panamanian community residing in LosAngeles.

Among the honorees, we had Vicky Greco de Altamirano, actress, singer and dancer, star of many musical productions in Panama and USA such as her last musical theater "El Zorro".
Omar Albertto, veteran of male modeling who elevated and change the image of the male model in USA.
Anayansi Prado, winner at Film Festivals, producer and director of documentaries on human rights, immigration, and justice.

Hon. Raoul Thorbourne was also honored, who was appointed as Judge of the Superior Court of Sacramento in 2005.​